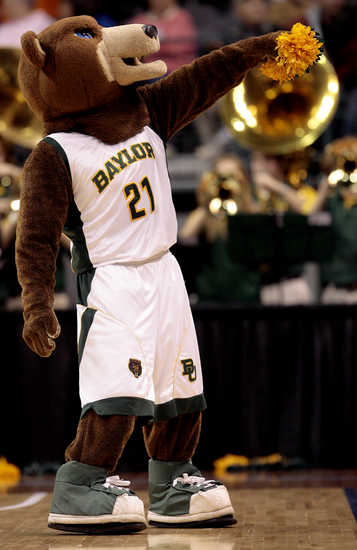 Judge and Bruiser are the official mascots of Baylor University

Judge and Bruiser are the mascots of Baylor University in Waco, Texas. Judge is the name of the live mascot, the North American black bear, and Bruiser is the costumed bear mascot. The tradition of bears being the mascots of Baylor University goes back to 1914, when Baylor President Samuel Palmer Brooks sponsored a local competition to find a mascot for the football team, which had been playing since the 1890’s.

There were over two dozen options entered, including an antelope, frogs, buffalo and ferrets, but Bears was ultimately selected. The first live bear, named Ted, was donated by local businessman Herbert E. Mayr who won him in a poker game from the 107th Engineers at nearby Camp MacArthur in 1917. The bear mascot premiered at the football game against Texas A&M that year. There has been a bear on the Baylor University campus ever since.

In 1974, the student body voted to give all future bears the first name of Judge followed by a surname to differentiate between them. Judge was chosen to honor Judge Robert Emmett Bledsoe Baylor, the founder of Baylor University. The current bears are Judge Joy Reynolds, named for the wife of former president Herbert Reynolds, and Judge Sue “Lady” Sloan, named for the wife of former president Robert Sloan.

In recent years, Bruiser has become a fixture on campus, as the costumed mascot of the team. He is usually seen wearing a variation of a team uniform.