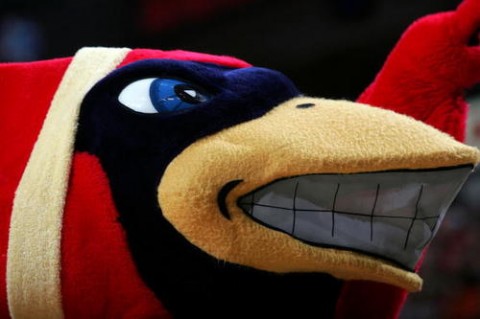 The Cyclones name dates back to 1895. Early that year, the State of Iowa suffered an unusually high number of devastating cyclones, or tornadoes. In September, the Iowa State football team traveled to Northwestern University and defeated its highly ranked team 36-0. The next day, the Chicago Tribune’s headline read Struck by a Cyclone: It Comes from Iowa and Devastates Evanston Town.

The article reported that Northwestern might as well have tried to play football with an Iowa cyclone as with the Iowa team it met yesterday. The nickname stuck and the Iowa State team had made a name for itself.

The school colors are cardinal and gold. The mascot is Cy, a cardinal, introduced in 1954. Since a cyclone was determined to be difficult to depict in costume, the cardinal was chosen in reference to the school colors. A contest was held to select a name for the mascot, with the name Cy being chosen as the winner.

In early Summer 2007, Cy was voted by fans on the CBS Sports website as the Most Dominant College Mascot on Earth.