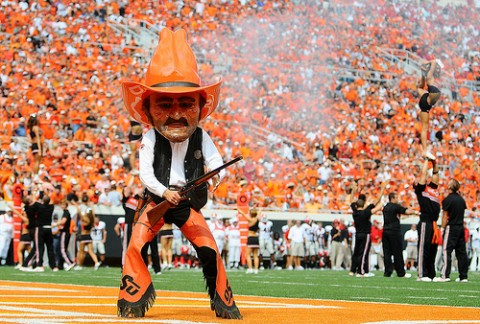 In 1958, Pistol Pete was adopted as the OSU mascot. The familiar caricature of Pistol Pete was officially sanctioned in 1984 by Oklahoma State University as a licensed symbol. Each year, an average of 15 Oklahoma State students audition to portray Pistol Pete. A panel of former Petes conduct the tryouts and select two replacements based largely on an interview.

Bullet is an American quarter horse gelding and an official OSU mascot. Bullet was introduced as an Oklahoma State tradition in 1984 as part of the Spirit Rider Program. Bullet gallops onto the football field at Boone Pickens Stadium, ridden by the Spirit Rider carrying an orange Oklahoma State flag, during pre-game and after every OSU Cowboys touchdown. The current Bullet is the fourth horse used in the OSU Spirit Rider program, and the third horse to be named Bullet.