The TCU Horned Frogs football team represents Texas Christian University in Ft. Worth, Texas. The TCU football team is a member of the NCAA Division I FBS and the Big 12 Conference. TCU began its football operations in 1896 and was one of the dominant college football programs during the 1930’s, 1940’s, and 1950’s. TCU won two national championships with Heisman Trophy winner Davey O’Brien in 1935 and 1938.

TCU was a member of the Southwest Conference from 1923 until the conference was dissolved in 1996. TCU plays its home football games in Amon G. Carter Stadium in Ft. Worth. TCU joined the Big 12 Conference in 2012. 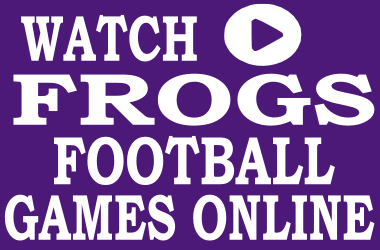 Get the best prices on tickets to Texas Christian University football games. You can comparison shop at one place online all the major sporting event ticket outlets at Big 12 Football Tickets. We offer the cheapest prices on TCU football tickets.

The TCU Horned Frogs football team opens the 2014 football season with a game against Samford. View the 2014 TCU football schedule at the 2014 Big 12 Football Schedule Grid.

The Texas Christian University football team mascot is Super Frog, a horned frog, which is actually a type of lizard. Learn more about Super Frog at TCU mascot and traditions.

The most popular message board forums for TCU Horned Frogs football are the independent Killer Frogs, Horned Frog Blitz, and Purple Menace.

Texas newspapers offer in depth coverage of TCU football. The most popular include:
TCU Daily Skiff…Official student run newspaper of Texas Christian University.
TCU360…TCU news from the TCU School of Journalism.
Star-Telegram…TCU sports from the Dallas-Fort Worth metro.